Under the sun-drenched skies of southern France, the boutique This Is Not a Love Song Festival finished up a fifth year of indie rock goodness. This is a festival for music lovers, with a highly curated lineup of some of the finest acts touring Europe during the summer. Overlapping sets are scarce, and all six stages can be covered in under three minutes of walking (2 minutes and 46 seconds to be more precise). 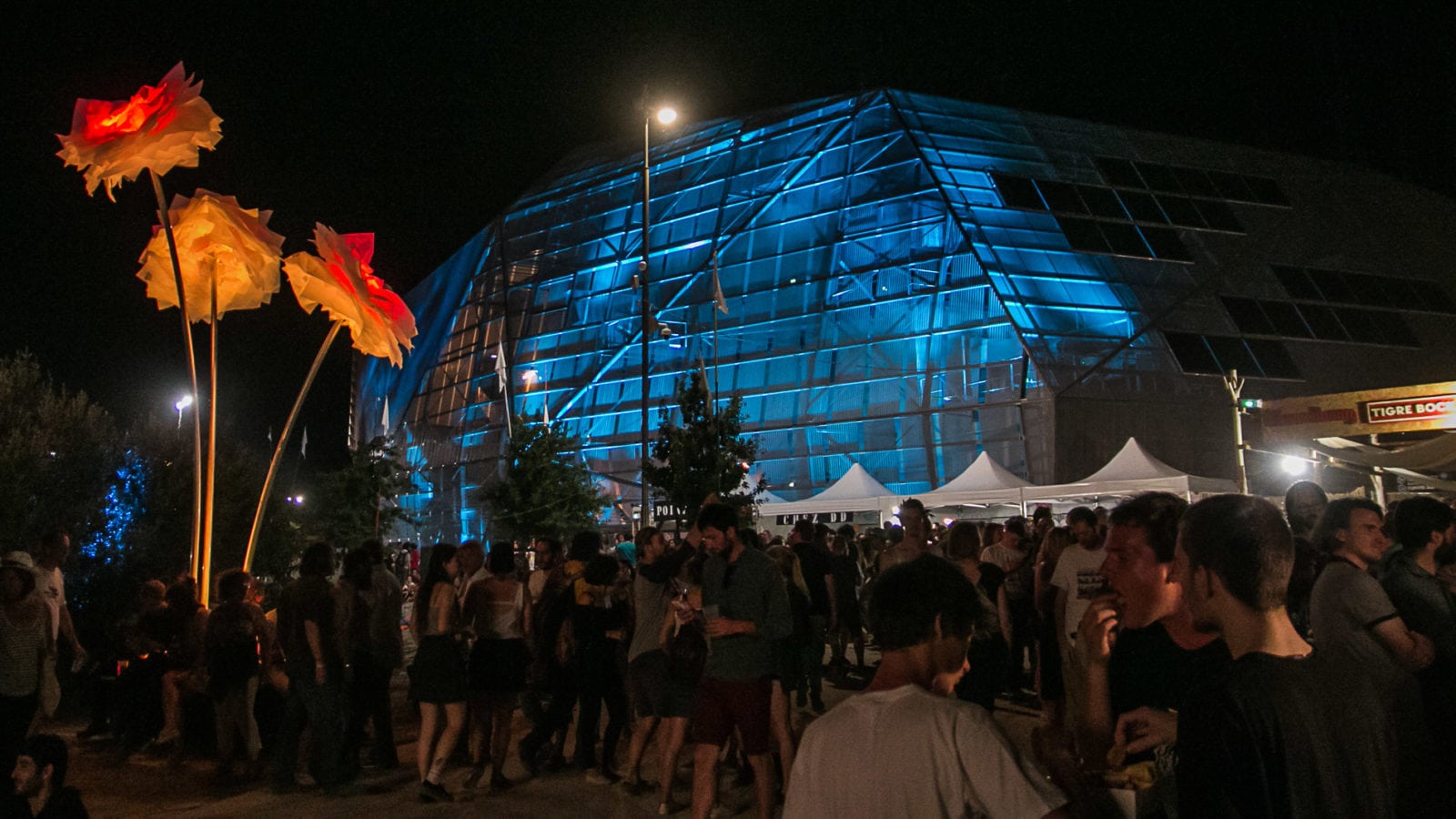 Favorite Set: The Growlers
This is where TINALS really shines, as I was able to get up close and personal with The Growlers during their early evening show. They’re all wearing matching style outfits to promote their new album. It’s downright adorable. 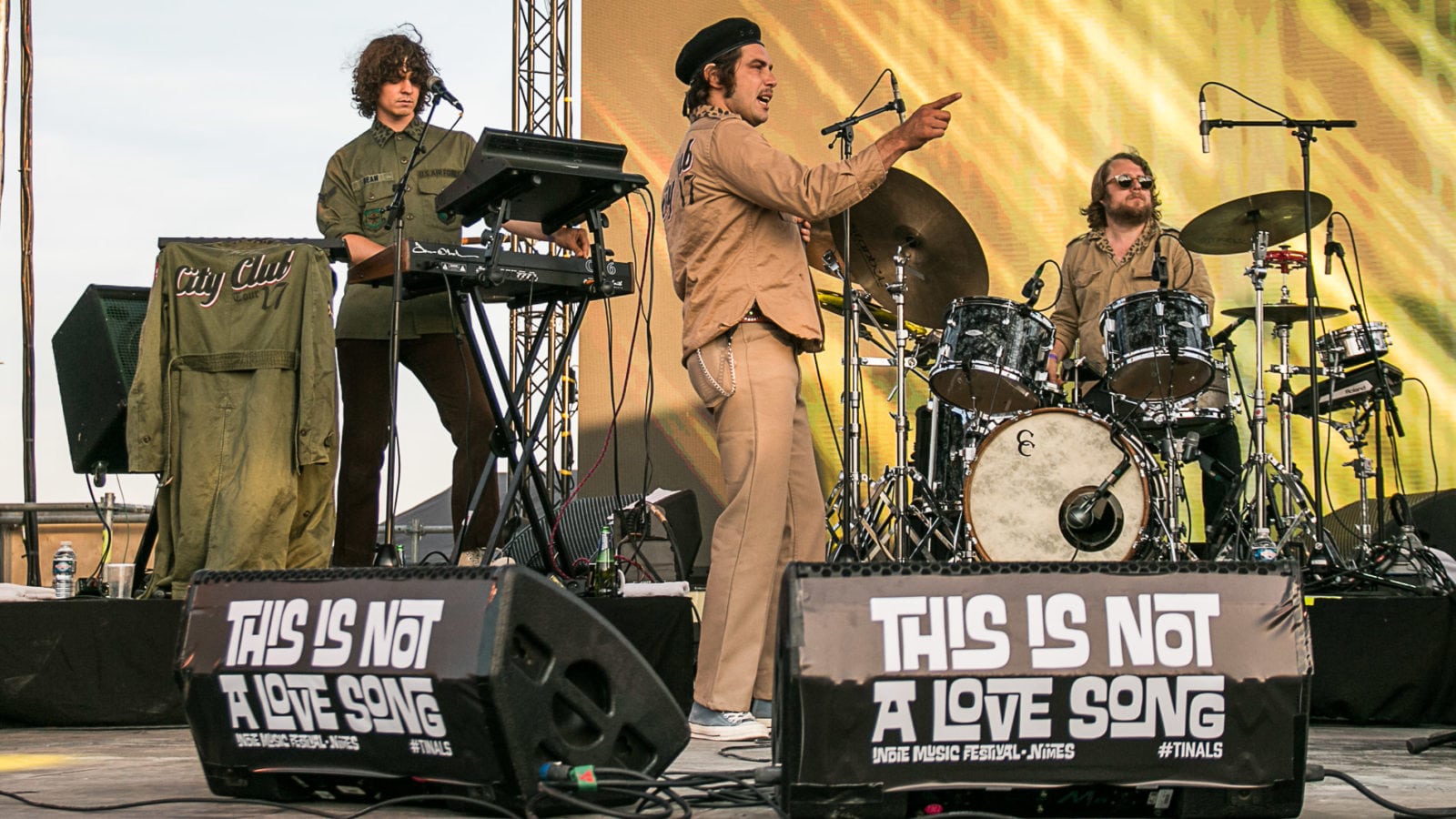 WTF Just Happened Set of the Day: Turbonegro
Never having heard of this infamous Norwegian punk band, I just walked into the show and it was completely batshit crazy, with legions of denim clad fans crowd surfing the indoor ballroom. The lead singer, Happy Tom, is a mash-up of Freddie Mercury and the head bouncer of a biker bar. It all just gets weirder from there. 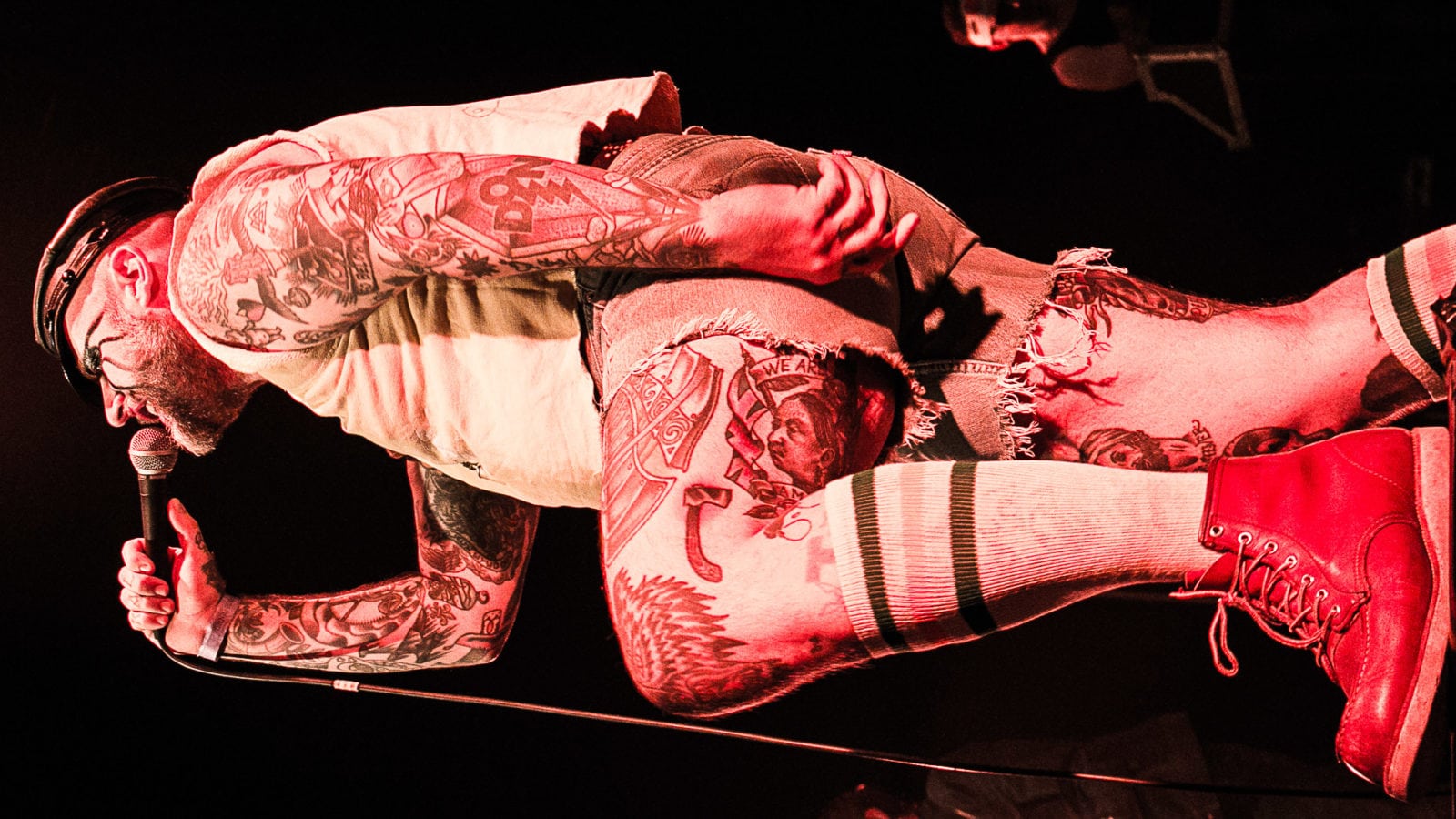 Favorite Set: Thee Oh Sees
Oh man, this is how to cap off a Saturday night with high energy craziness from these TINALS alumni. Two drum sets front and center, along with the zany onstage antics of John Dwyer kept this performance humming along.

Surprise of the Day: Johnny Mafia
The Patio Stage, meant for contemplative singer-songwriter sets, could not contain Johnny Mafia and their fan’s enthusiasm, which led to one of the more rambunctious sets of the weekend. These are those times when I worry about my camera. 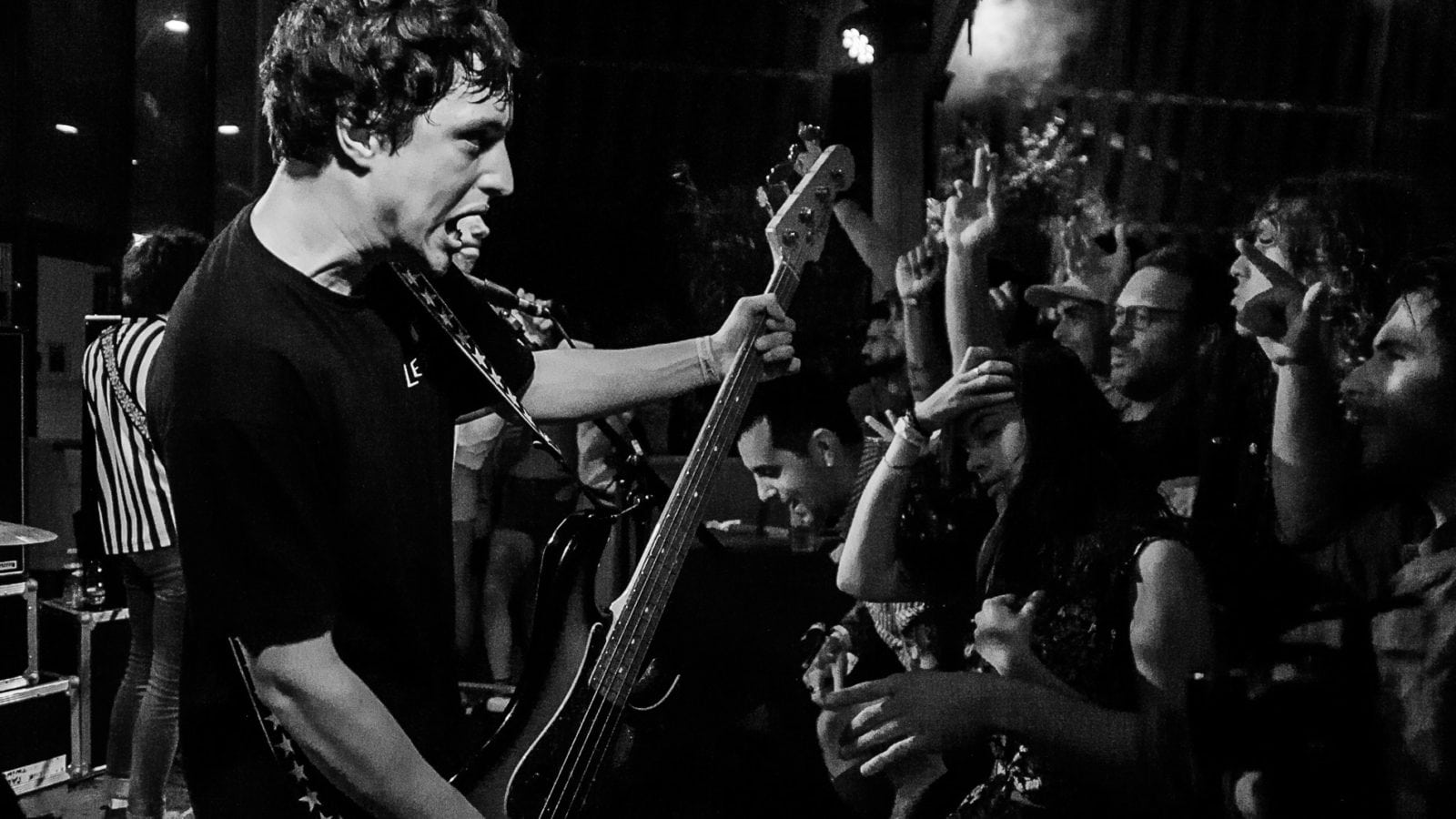 WTF Just Happened Set of the Day: I didn’t know anything about Jake Bugg until I turned around in the photo pit and was greeted with a sea of expectant teenage girls. Then the UK singer-songwriter came out, and the screaming ensued (also, see Isaac from Slaves on Sunday after removing his shirt). 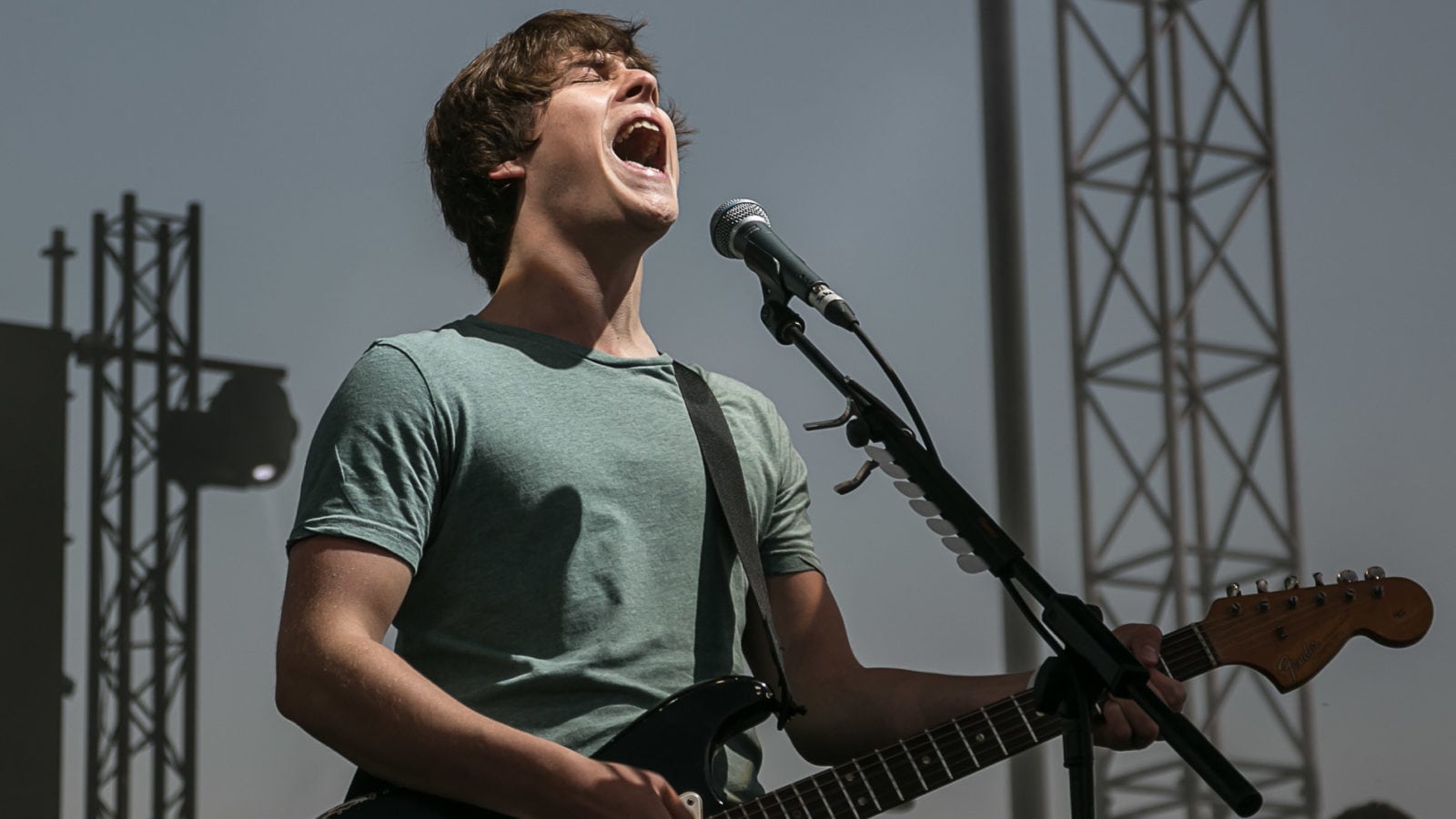 Favorite Set of the Day: Frank Carter & The Rattlesnakes
I first came across Frank Carter and the Rattlesnakes during a secret show at LeeFest in England last summer. As photographic evidence proves, I spent more time on stage with the band than actually taking any pictures, so was pretty happy to be able to snap some pics this time around. He did his walking-like-Jesus across the crowd act, before starting a mad circle pit dash around the sound tower. 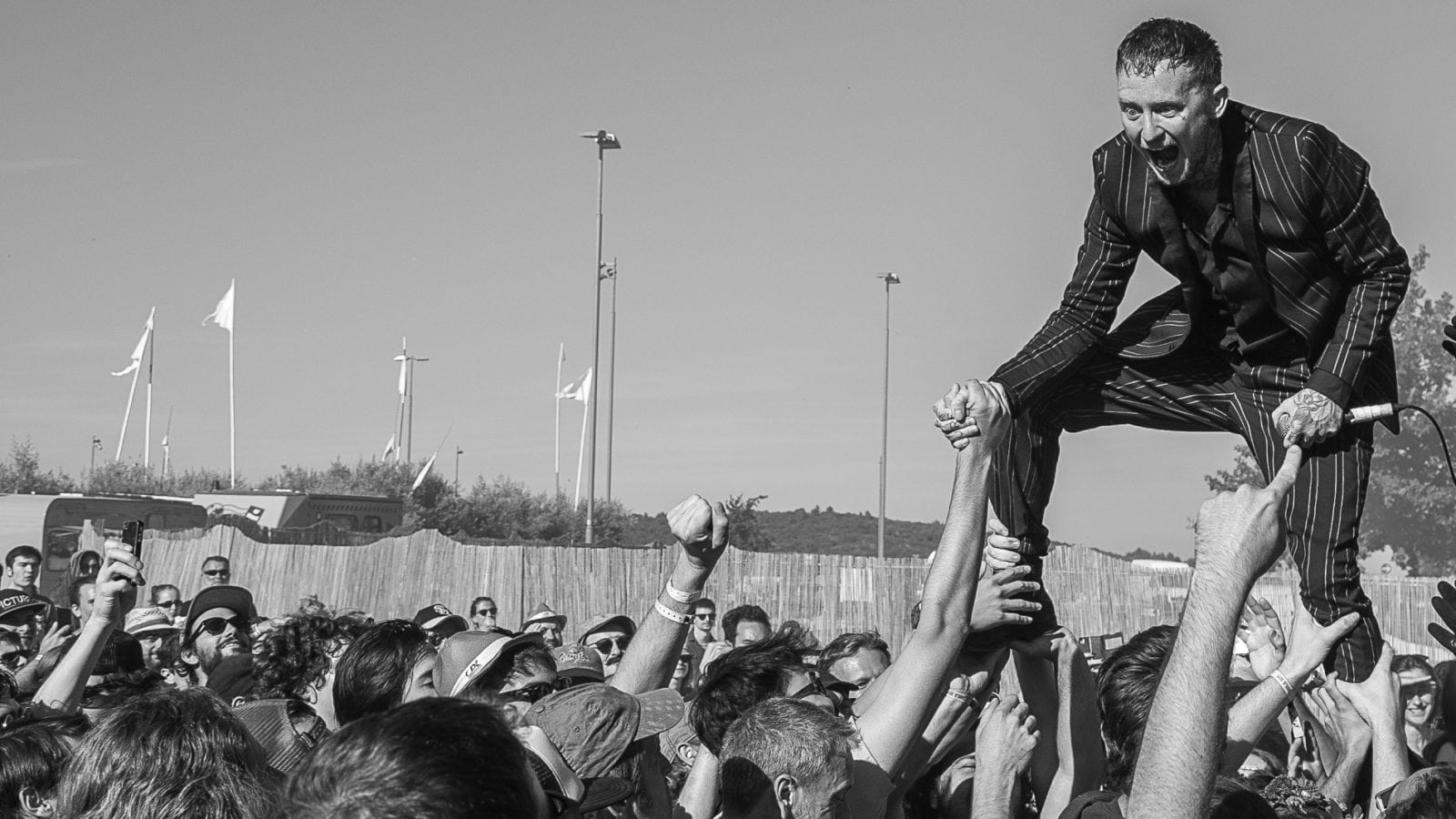 Frank Carter and The Rattlesnakes

Surprise Set of the Day: Baroness
I thought I would like The Black Angels psychedelic light show vibe more than the heavy metal thrashing of Baroness. I was wrong.

WTF Just Happened Set of the Day: Royal Trux
I stopped by to see the reformed Royal Trux for a few minutes, and was spellbound by how terrible they sound. I know that the whole drunken sloppy mess is supposed to be part of their charm, and I got to admit, I couldn’t walk away from the trainwreck. 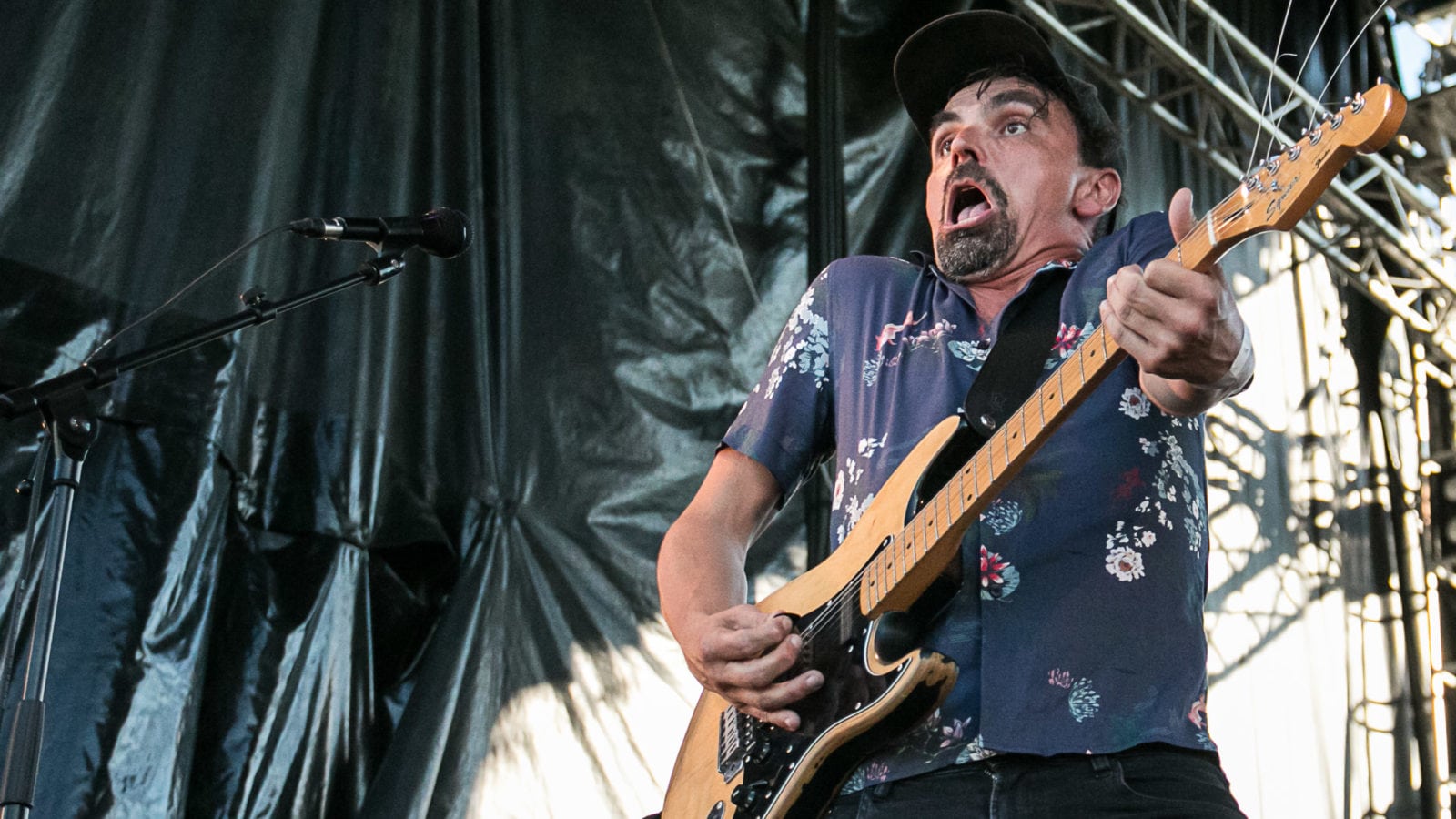 Favorite Song Title: All My Friends Are Dead/Turbonegro

Favorite Speech: “I’m half-Irish and half-English and if I go into the sun, I burn. Like a vampire.” Frank Carter.

While taking pictures of the misting area, this French dude went into full male model mode. 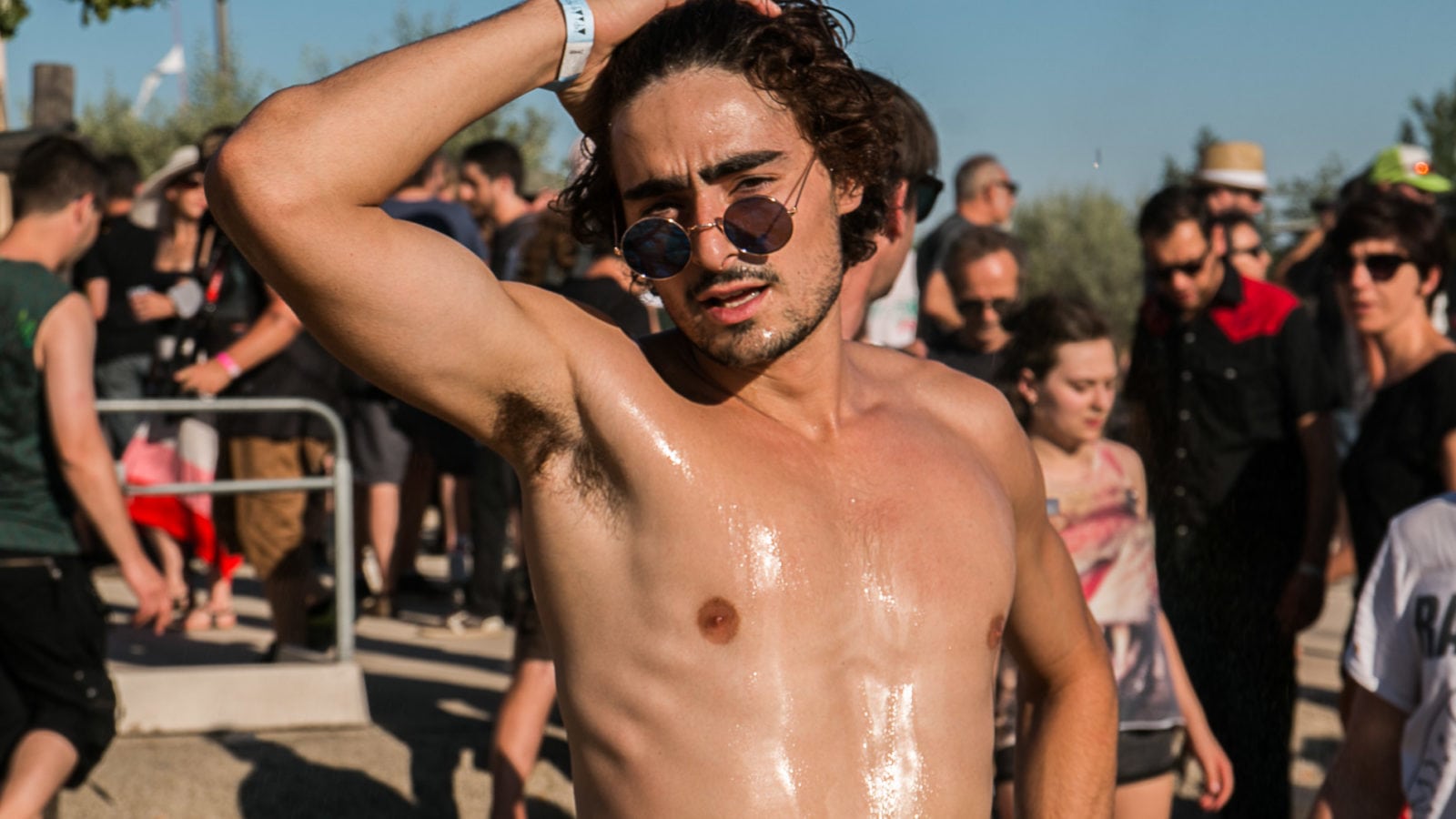 Litter Free Festivaling
I’m always shocked by how little litter is on the ground when reusable cups are employed. The basic premise is that you pay a small deposit for a sturdy, branded cup to use for the weekend. Turn in the cup, get your deposit back. Not only does it save the environment, but you end up with a nice souvenir. Every festival should be doing this.

The Disco Van
Just a dude outside his van playing surf music while wearing a luche libre mask. Welcome to France. 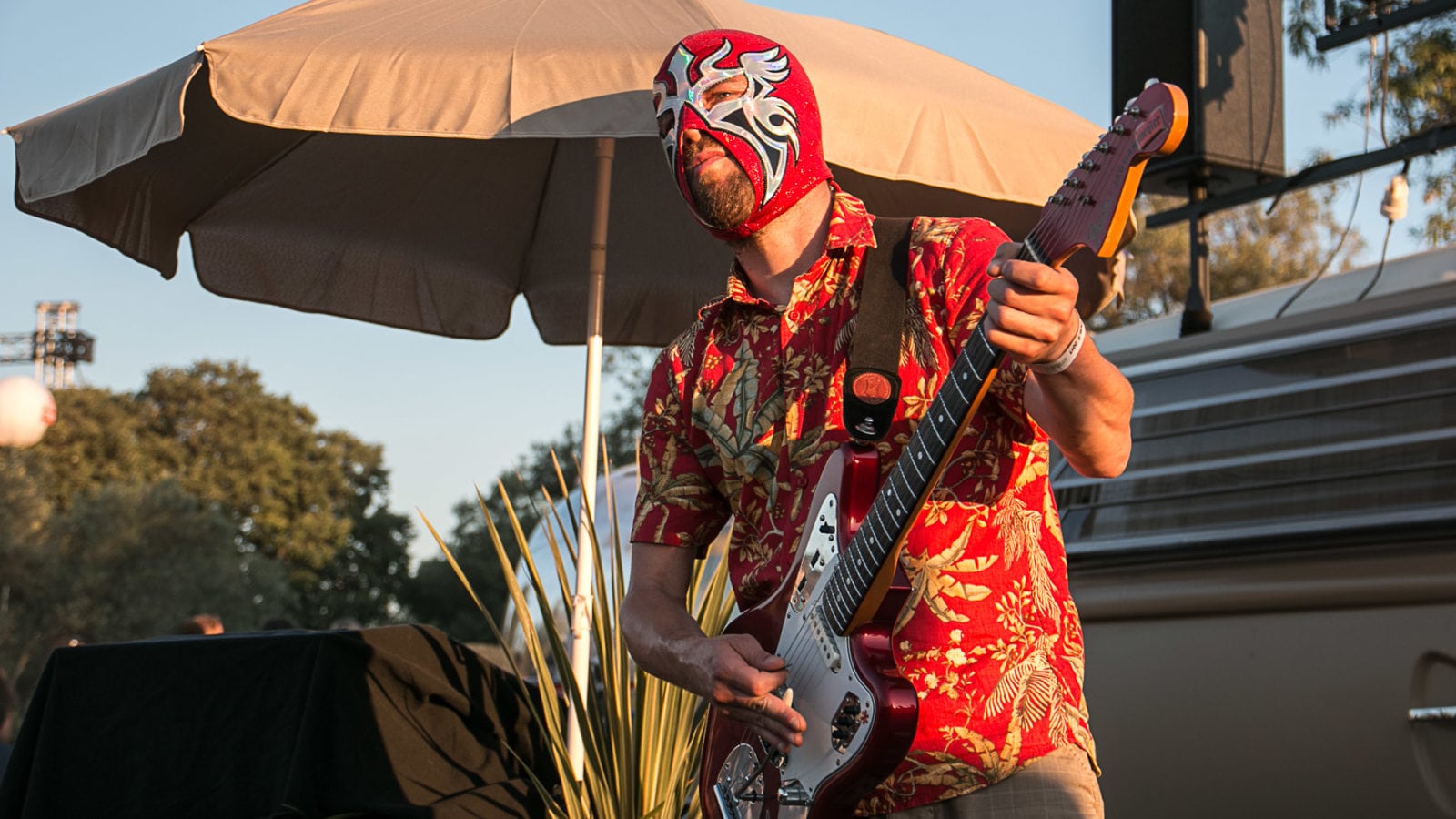 One taken from each day. I’d like to point out that I’ve had eight festival days and no rain. Bring it on, festival gods! 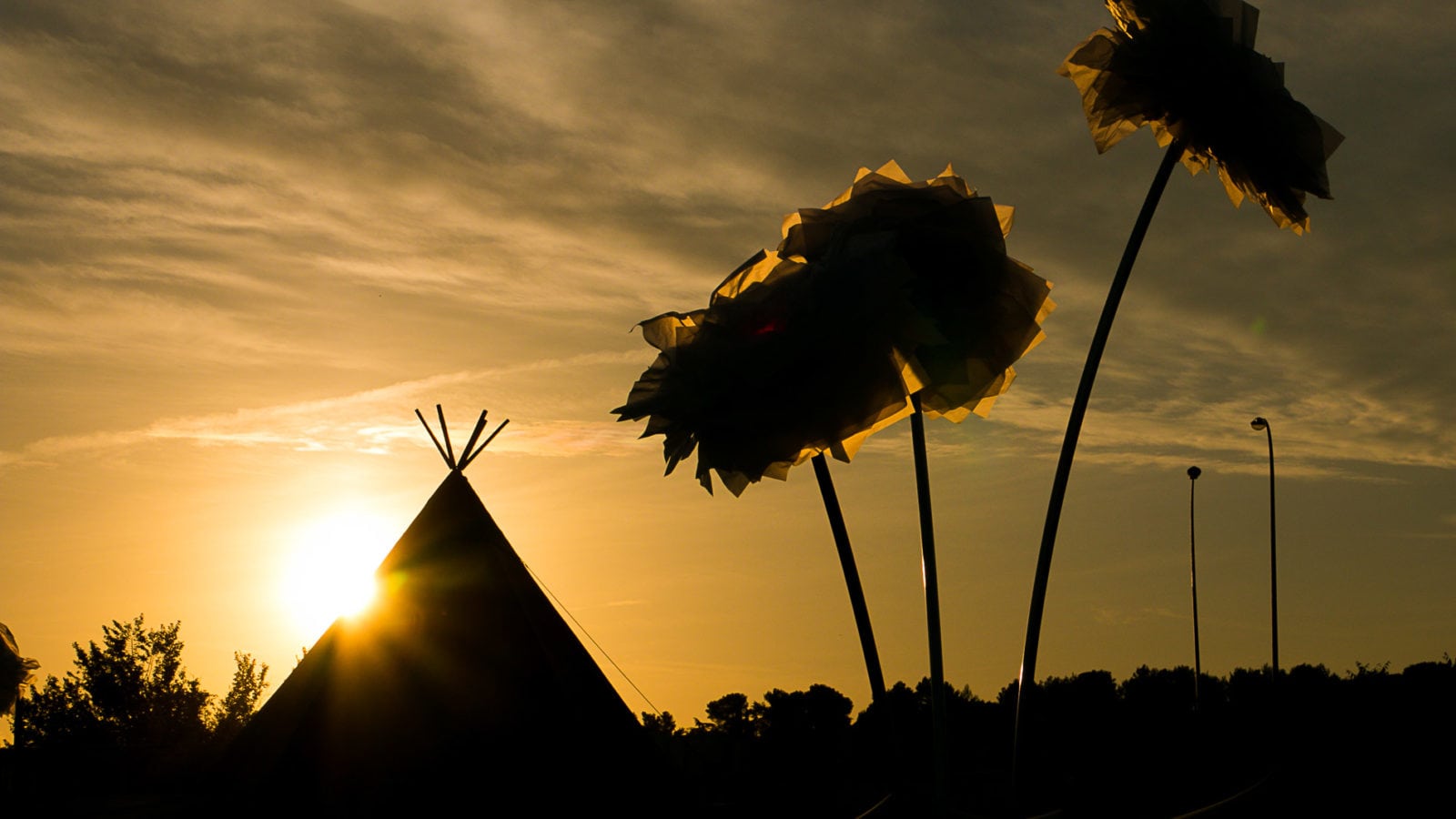 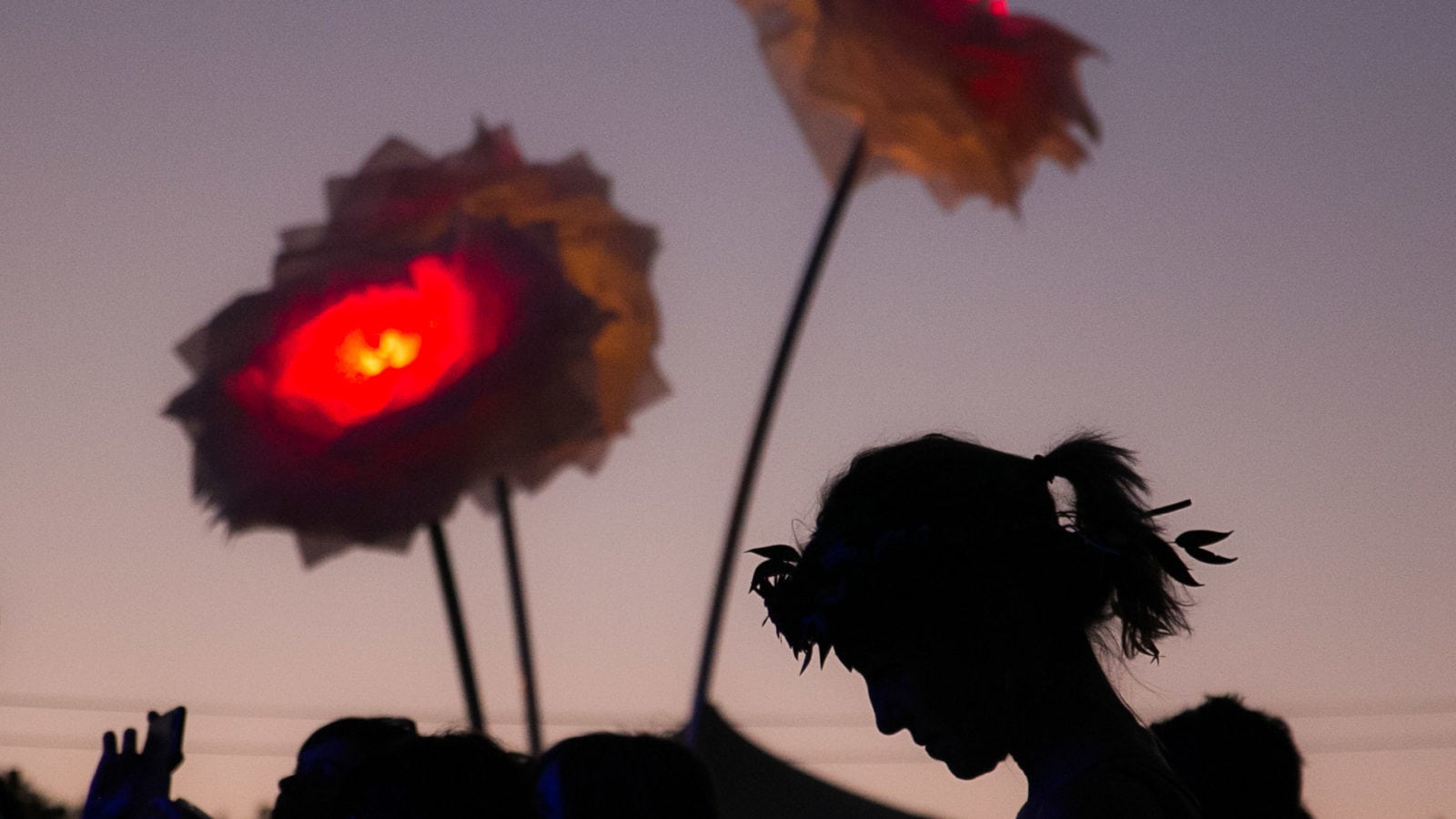 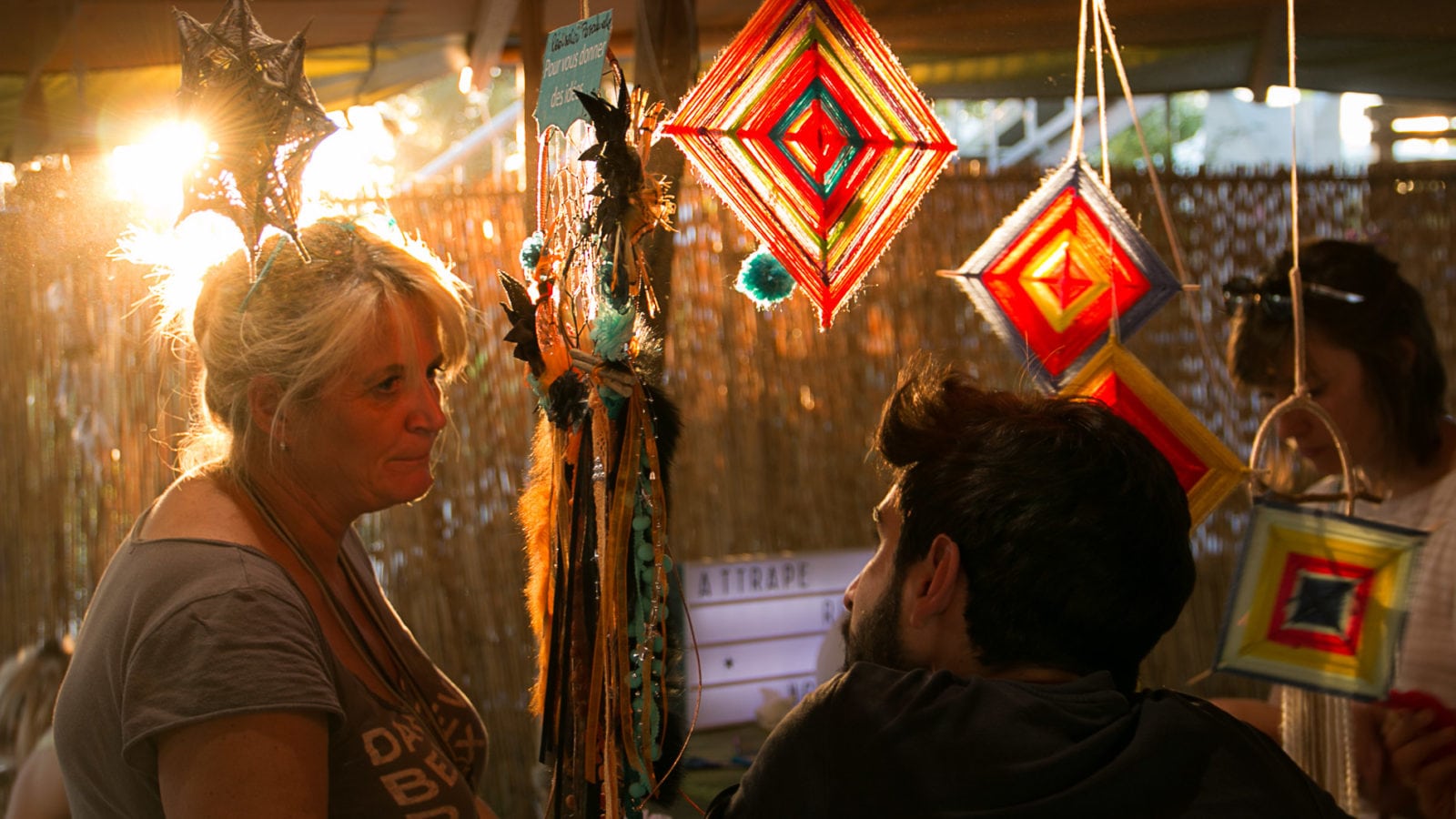 Best Festival Toilets in the World
I’ve been to this festival twice and I’m calling it. Best toilets ever. You have your choice of classic indoor flush toilets, or outdoor state-of-the art composting wonders. I never have to wait in line and everything is super clean.

Art, Man
You can say a lot of things about the architecture of the Paloma venue, but you definitely can’t say it’s uninteresting. Last year, I compared it to an enormous brown turd, but I see know that it’s obviously a loving recreation of a Jawa garbage scavenger from Star Wars (I like sunsets and Star Wars – deal with it). 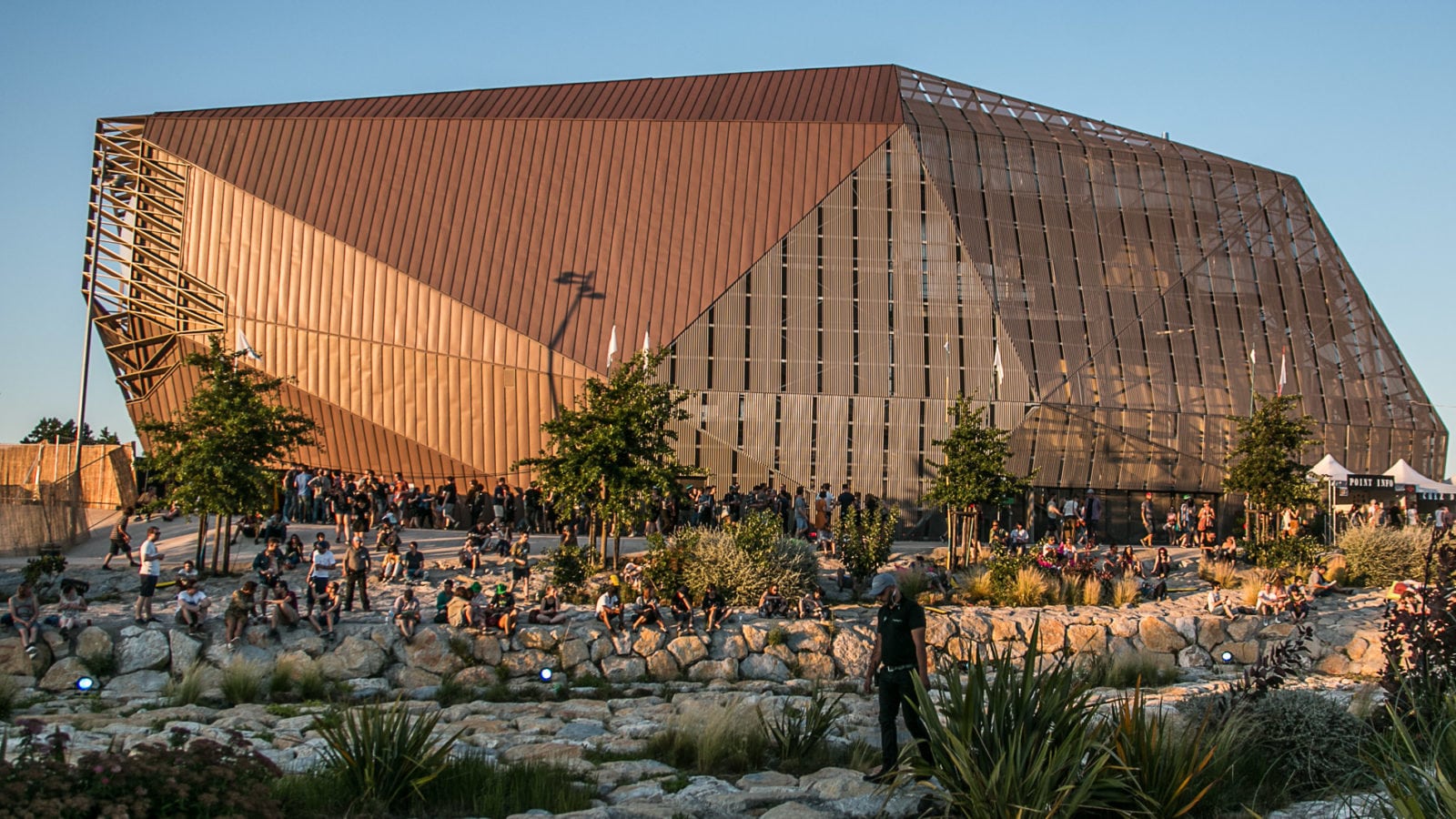 With top notch music in an intimate setting, TINALS continues to be one of my favorite boutique festivals. The city of Nimes, stuffed with Roman treasures galore, is easily worth a couple days of exploration, and unlike most weekends, I’m actually more relaxed at the end of this festival.